Whether you struggle to have a proper meal first thing in the morning, or you can’t bring yourself to rise early enough for a bowl of porridge to vacate your stomach and progress down the digestive system before the 8am swim, fuelling before Sunday morning club training can be tricky. But there are some big reasons to give this comparatively small challenge some attention; firstly, you will need to find a way to take on some early morning fuel on race days so now’s your chance to practise; and secondly, your training sessions will usually be more effective and enjoyable if you’re not running on empty.

Coming to training on an empty stomach means you won’t be able to swim or run as fast as you could if you were properly fuelled, it will make it harder to recover after training and you’ll increase your cortisol levels making your body burn more glycogen relative to fat at rest later in the day. If you want to swim and run faster, you need practise swimming and running faster – give yourself the best chance to do this by eating a light, carbohydrate-rich breakfast a couple of hours before training. No-one gets this right all the time, so if you don’t manage it, a banana or even some quickly-absorbed sports nutrition is better than nothing.

LFTC runs three hours of training on Sunday mornings through the winter, two swims and one run. Swimmers from both 8am and 11am sessions are encouraged to come to the run session at 9.15am, but the most popular combination is the 8am swim and 9.15am run. This is a great opportunity to get used to doing two disciplines back-to-back, it will increase both your physical and mental endurance as well as hone your ability to get changed in a hurry! Let’s take a look at the energy cost of doing these two sessions:

Calories burned during 1 hour of activity:

These values are from Nutristrategy.com, which has a table of energy expenditure by activity based on data from the American College of Sports Medicine. The energy expenditure shown here for swimming is an average of the average of freestyle ‘fast’ and freestyle ‘slow’ since our training sessions vary in pace. They are also for an hour of continuous swimming and in club sessions there is usually some planned rest and a minute or so here and there for coaches to give instructions, but I would estimate it’s probably accurate to within about 10% (based on the time spent actually swimming on my watch when I’m taking part in sessions!).

So a 70kg athlete taking part in both sessions would burn around 1300kcal in a morning’s training. Don’t worry – you don’t need to eat all of this! Up to 50% of it will come from fat – though usually it will be less fat than glycogen (bear in mind you may want to replace it later, though, if you want to maintain your weight – more on this below).

If you come to training with your energy stores topped up, i.e. you have eaten with the last 4 hours and maybe had a small snack in the hour before the session, then, depending on how hard you work during the sessions, you should probably be able to get through without refuelling. If you’ve worked very hard during the swim, or you’ve done a lot of kicking, a small carbohydrate snack that you can tolerate between the swim and the run like half a banana may help you to maintain a fast pace for your run session. If you haven’t eaten since the night before, you’re essentially doing fasted training.

Fasted training is one of the myriad of training approaches you might take to elicit a specific adaptation. For fasted training, this adaptation is about improving the function of mitochondria in our muscle cells, thereby increasing our ability to use fat as a fuel. This trains the body to use carbohydrate more sparingly at low intensities, thereby conserving stores for when you most need them, such as the last half of the run in a middle distance or full ironman. Fasted training in the morning, i.e. before breakfast, is generally recommended for durations of up to about 60 minutes to perhaps 90 minutes maximum and should be done at low intensity (up to about 60-65% effort or maximum heart rate). Experts like Asker Jeukendrup recommend that if you are planning to do fasted training, you use it strategically and not all the time. After all, your body also needs to be good at quickly absorbing carbohydrates and putting them to use so that when you do reach for that gel in a race, it quickly has the desired effect!

The club swim and run sessions don’t resemble a fasted training session – they would likely be much less interesting if they did!

What’s the worst that can happen?

If you’ve been coming to Sunday training on an empty stomach for a while, you’ll probably have found that you can get through it and the sky didn’t fall down. However, if you’re running low on glycogen, this is going to start slowing you down – it will be harder to train at your desired pace in the run and if you do it week-in-week-out, you’re missing a big opportunity to teach your body to run at a faster pace. It will also lead to an increase in cortisol levels – cortisol is known as the stress hormone and is normally highest in the morning anyway, so doing moderate-to-high-intensity fasted training in the morning is going to really elevate cortisol levels. I won’t go into the list of knock on effects, but know that keeping your cortisol levels in check is really worthwhile, especially when you’re training for an endurance event. If you’re starting to run out of glycogen/glucose for energy, your body will start to use protein as the next easiest-to-convert energy source.

After a hard training session you’ll have caused a bit of muscle damage (this is a normal and useful training stimulus when it’s administered in a controlled way), but as you can imagine, if muscle tissue is being broken down for fuel to keep you going, there won’t be much muscle repair happening so your muscles are more likely for feel sore and tired in the next day or so. Lastly, worst case scenario (in the short-term at least) you could ‘bonk’ on the way home! If you’re not familiar with the terminology, ‘bonking’ this is when you totally run out of energy and there is not enough glucose circulating for your nervous system to function properly. If you’re still running or cycling, you’ll suddenly slow to a crawl and you might start to feel pretty despondent or tearful – if you’ve been there, you’ll know what I mean, if you haven’t, let’s just say I don’t recommend it!

Let’s get to the good stuff – what should I eat?

This is up to you and depends on how quick your digestive system is, how early you get up before training and what you’re used to. If you’re eating a good 2-4 hours before training, you can eat a balanced breakfast of your choice. The closer it gets to the session, the easier to digest your breakfast will need to be. Easy/quick to digest foods are characterised by: 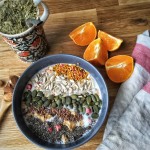 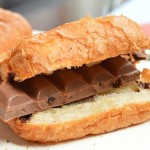 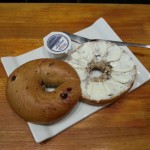 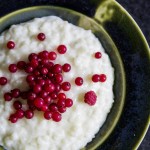 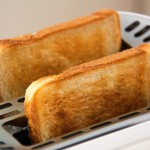 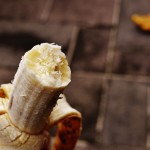 The most extreme version of these characteristics is the type of thing you would eat during training or racing, but an hour or two beforehand including a source of easily-digestible protein could help pre-empt the breakdown of muscle for fuel towards the end of training.

Coach Nick points out that what works for one person won’t necessarily work for you. “Trial different things to see what works for your body, for example, caffeine can boost performance; for some people it can send them running to the toilet, for others it’s not a problem.”

What about after training?

This is perhaps another blog post, but don’t neglect the refuel after training either. If you have lots of training coming up in the days ahead, your muscles will absorb carbohydrates like a sponge in the hour or two following training which will get you though upcoming training sessions feeling strong. If you’ve been training for a couple of hours like on a Sunday morning of swim and run, some protein in your post-training snack will help conserve muscle tissue as your body recovers and gets back to baseline energy metabolism. You don’t need anything fancy, regular milk is a good choice so that milky coffee with your toast in the café will work nicely (though be aware that steamed milk can make it seem like you’re getting a lot more than you really are so might not be enough).

Coach Mick like to make his own smoothie when he gets home. “My go-to immediate post recovery fuel is full fat unhomogenised milk smoothie with banana, nuts, oats, honey and natural yogurt [AB: Tip: traditional Greek yoghurt has a lot more protein than regular natural yogurt]. It gives fluid, carbs, protein and fat. Beats synthetic recovery drinks hands-down.” For anyone who doesn’t eat dairy, you’re probably acutely aware of what the best protein sources are for you, but soya milk has almost as much protein as dairy-milks, although the same doesn’t apply to almond or coconut milks with have almost none.

What do you eat before Sunday training? Or what might you try after reading this? Add your thoughts below to suggest any pre-training delights I haven’t thought of and help your fellow clubmates!