After a week of cool grey skies, we were looking forwards to a bright sunny day for the Thorpe Olympic Distance Triathlon. The race is new to the London League race series in 2016 and it’s the first time that Tri Project have held an Olympic distance race in Thorpe. There are few open-water swim triathlons in London and with Thorpe Park being within the M25, it’s practically on the doorstep! It didn’t seem quite so close when we worked out the time we’d need to leave Hackney to get to registration in time, but the team summoned mental grit and courage to make their way across London as the dawn chorus was getting underway. The rest of the day could only be easier!

It was strange arriving in a theme park full of triathletes wheeling their bikes past the water slides and silent rollercoaster tracks to set-up their space in transition, but with suncream to apply, numbers to attach and friends to greet ahead of the race-briefing there was little time to contemplate the setting. Our under-30 males went off first, followed by the under 40s with the final wave comprising veterans and female athletes. The swim course was shaped ‘like a bowtie’ according to a friend (who had clearly studied the course map more carefully than I had!), looping around the lake on the Eastern side of the ‘island’ that is the theme park and passing under the bridge in the middle. The water was a little weedy in places but clear enough to easy stay on the toes of the swimmer in front. 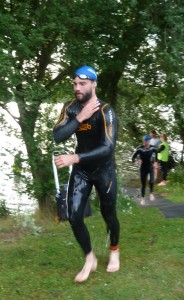 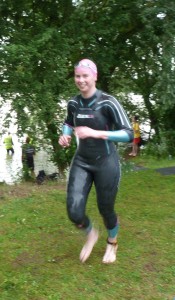 First male and female out of the water: Luke Hawkins and Ellie Wiseman
All photos reproduced with permission from Becky Booth

Transition was a long narrow area so the knowing where to find your bike was key! The first kilometre or so of the bike course was closed roads within the park’s boundaries, but the sharp corners meant that it still required focus. Then out onto a single-lap road circuit, which was a fairly flat fast course only about 230m of climbing. In spite of the race venue being just on the edge of suburbia, the organisers managed to find a route with only 1 set of traffic lights which they managed to neutralise with a timing mat, making for a novel tactical opportunity for those looking to recover momentarily after climbing the hill to a red light. There were a lot of roundabouts, though, to practise wide sweeping cornering!

After the relative solitude of the bike course, the run was busy and becoming noisy and atmospheric. With 3 laps to cover, the course itself was busy with athletes from various start waves running together but the theme park had also opened it’s gates for the day and bemused families were mingling with the race spectators. The rollercoasters had rumbled into action, high-pitched screams were starting to pierce the air and as the course passed the back of a cafe there was the sweet-and-sour smell of frying doughnuts and tomato ketchup.

Becky Booth did a fantastic job of cheering the team along every time they came past on the run and judging by her photos, putting huge smiles on the faces of the racers. Clapham Chasers, the host club, put on a show of baking mastery with a great spread of goodies to refuel the tired athletes. 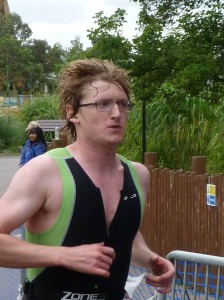 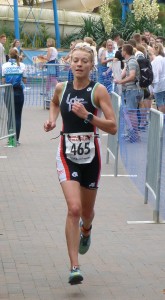 First male and female overall to Richard Stones and Helen Croydon.
All photos reproduced with permission from Becky Booth

The LFTC team posted some great results with Luke Hawkins exiting the swim just 3 seconds ahead of Richard Stones in 22:19 and 22:21 respectively. The fastest bike of the day from the LFTC team was Wei-Ho in 1:09:10 and Andy Wakeling bossed the run in 40:35. Richard Stones was the fastest male with a total time of 2:18:34 and 14th in his age category. In the women’s team, Ellie Wiseman was first out of the water and 3rd swimmer overall after Luke and Richard but Helen Croydon posted the fastest bike and run times so finishing fastest overall, coming 4th in her age-group with 2:23:22. Mick Cairns put in a great performance finishing 4th in his age-group. Massive congratulations to Izzy Jones for pushing through to finish her first Olympic-distance triathlon despite having foot problems in the bike and run. Kings of transition were Richard Stones and Nick Brackenbury for T1 and T2 respectively.

Here are the top three male and female results and your 2016 Olympic-Distance club champions: